I met Nichole Skalski about three years ago through our involvement in a group called the North Bay Flower Collective – which started as a way for local flower farmers and florists to get together and share resources and support, but has grown to be a lot more than that for our ever-growing membership. Nichole, along with her business partner Kathy Green, started the Sonoma Flower Mart just a few years ago with hopes of supporting all the small business owners in our group and beyond. 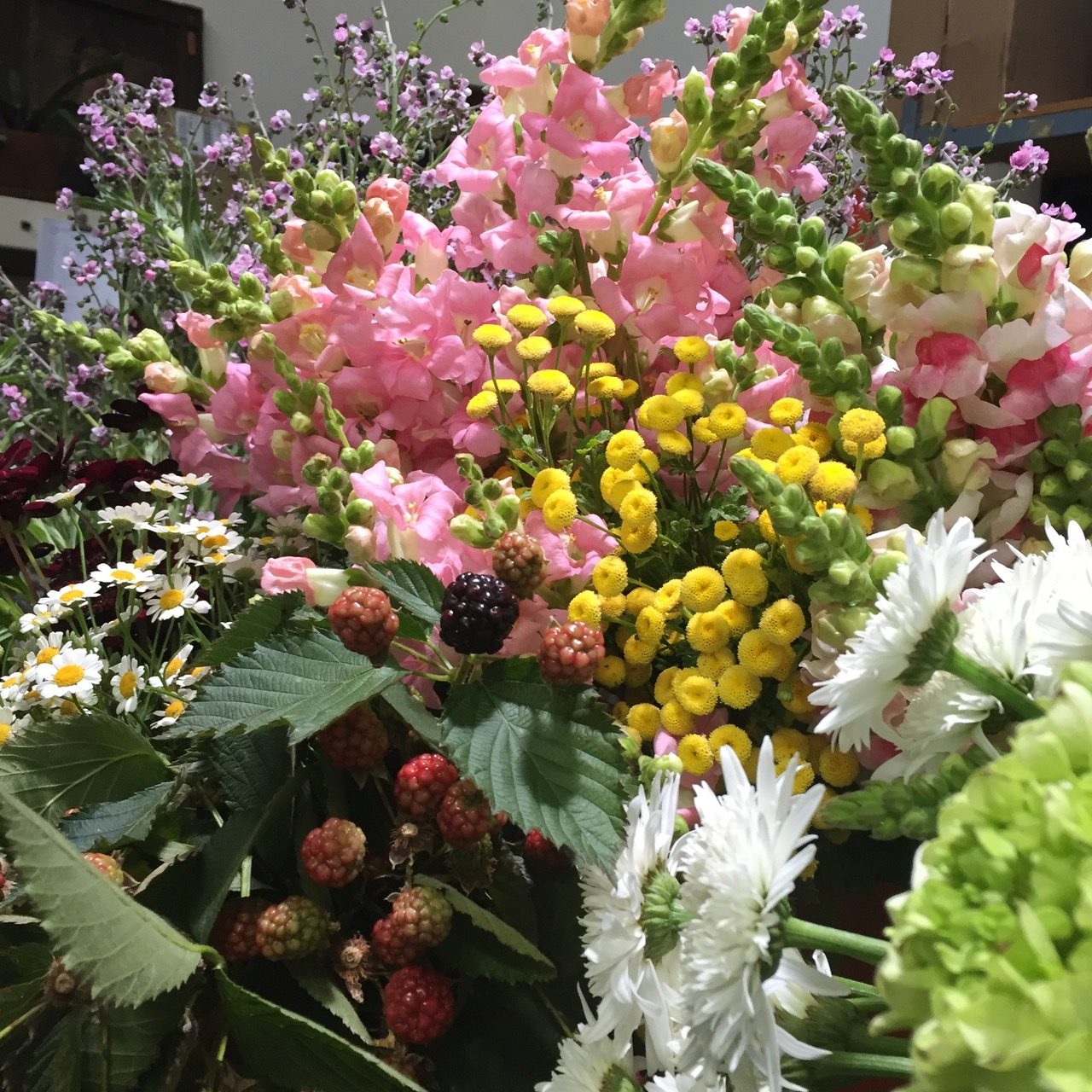 The result has been a huge success. Gearing up for their third year in business, Nichole and Kathy are unveiling a new model for the mart, complete with doors open to the public. Moving away from a wholesaler (i.e. ‘middle man’) model, from now on the farmers themselves will be there during the mart’s operating hours to sell their flowers directly to both wholesale and retail customers. This is the hub for all flowers in the North Bay, and we’ve got more flowers around these parts than you might think. I’ll be participating as both a buyer and a seller, and have been enthusiastic about the project throughout all of its stages. We’re set to open in May, and I sat down with Nichole last week during the calm before the storm to hear more about her story.

So Nichole, tell us in your words what the whole idea is behind the Sonoma Flower Mart.

At its core, it’s a local flower mart – local meaning that we celebrate the farmers growing these amazing flowers right here in our area. We’ve tried a few different things over the years in figuring out how best to accomplish this. In 2013 it started as a grassroots ‘hub’ for all the florists and the flower farmers I had recently met through participating in the North Bay Flower Collective.

I knew that I definitely wanted to get into flowers somehow. I was designing for weddings at the time, so the Flower Mart was something that I was interested in on a larger scale, and I was also looking to keep our product and our activities local and avoid going to San Francisco all the time to get flowers. The product we need is growing right here, all over the county, and florists were either going to SF or driving all over the place to get flowers. The idea of a hub for my business as well as others’ just seemed so necessary.

Before you got to know all these people, did you know about all the farms up here?

I really didn’t! The timing seemed perfect. Even before I worked in the industry, I remember being frustrated that in spite of living in this ag-rich area, it was hard to get my hands on anything but supermarket flowers! I’ve always loved bringing flowers to the man or woman of the house when I go out – it’s always been my most favorite gift to give. I’ve always been a gardener, but even so it was hard to find everything I needed. I knew people were out there in our area growing flowers, but I just didn’t know how to access them.

It was around that time that I met Tim from F.E.E.D. Sonoma while I was working at Farm Fresh Clothing Co. as their bookkeeper. He’s a really interesting and knowledgeable guy, and I remember casually mentioning to him that I wanted to do something with flowers – maybe a flower shop. He just instantly thought it was a great idea, telling me that many of the farms he worked with also grew flowers alongside their produce. He was a huge support early on, even housing the project during the first season. 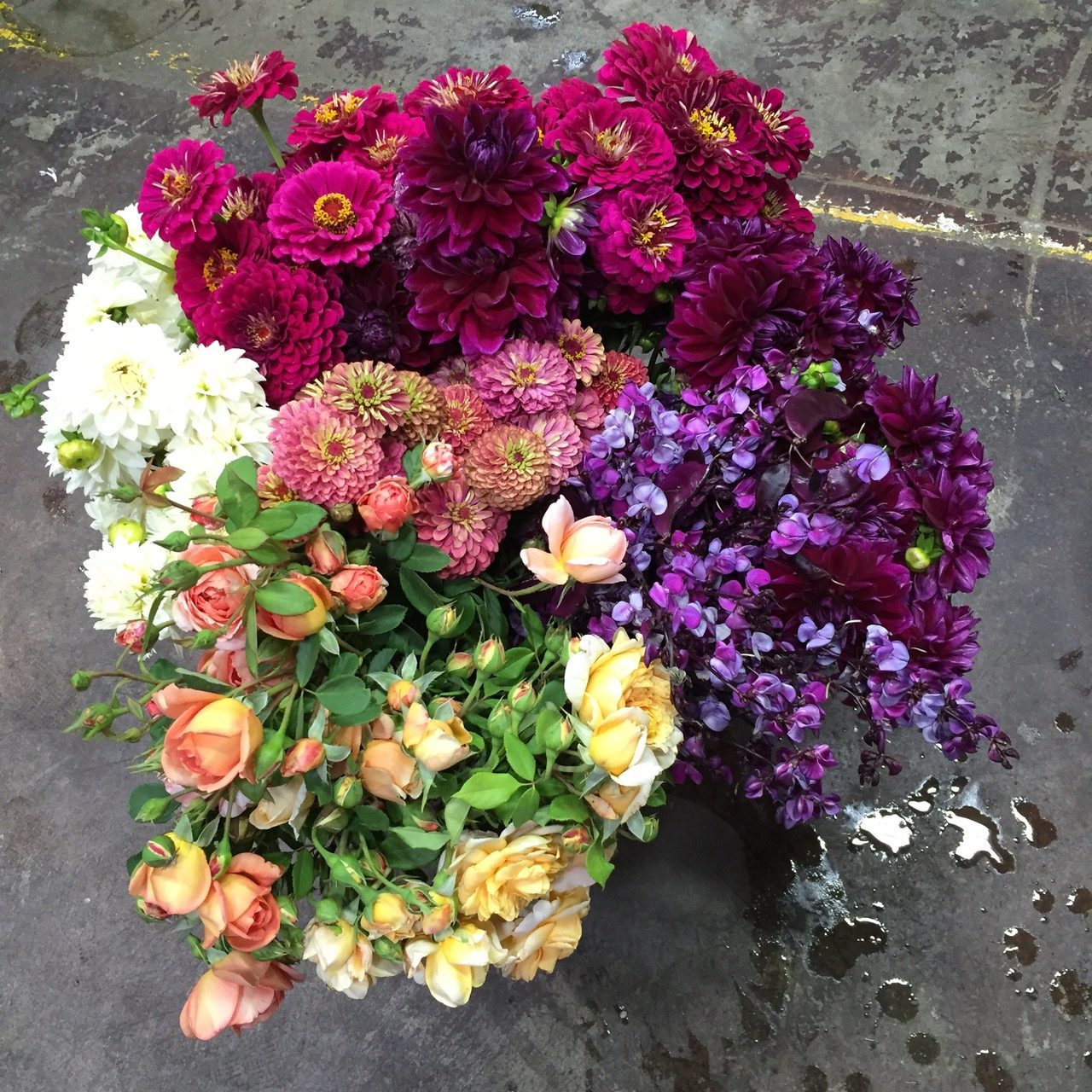 Who else did you look to in figuring out a model for this business?

Well, the Seattle Wholesale Growers Market has been a huge inspiration from the get-go. They’ve had great success with their model and have been really open and generous with sharing their insight. Debra Prinzing of Slow Flowers has also been instrumental in getting the word out about local flowers and our business in particular. She does an amazing job of bringing people together, highlighting all of our businesses, and raising awareness. We got to host her out here last year which was really amazing.

So this will be the Mart’s third season in business, wow! What are some things you’ve learned along the way?

Well, number one, I learned that there’s not a huge profit margin in being the middleman in this game! In years past we were buying from the farmers and re-selling to the end customer. It was a huge success in many ways, but it wasn’t financially viable for our business. So this year we’re really excited to invite the farmers in to sell directly to their customers.

Another lesson learned is that it’s hard for designers to purchase flowers sight unseen. It’s just such a visual thing, all about color, texture, shape… all of those things. There’re just so many variables.

So this will be the first year that the Mart is really open up to retail. Do you think most of the customers will be wholesale or retail?

I think this season it will probably be about 70% florists and 30% general public. Many are studio weddings florists, doing weddings as well as daily deliveries, and weekly accounts.

I predict that it will grow like crazy once the word spreads. Who wouldn’t want to come shop fresh flowers every week?

Yes, I think it’s going to be total eye candy. I’m so excited.

Last year we mainly sold to a consistent core of around 15 florists. Really, it started within the North Bay Flower Collective, though there were some brave souls who heard about it and came knocking on the door. “I heard there’s a flower mart back here..?” It wasn’t an easy locale to find! I really appreciated it when people took a chance and ventured outside of their comfort zone to figure it out. We weren’t ready to go big that first year, it was more the beta-testing phase. Now we’re ready to take off. I think it’s going to be a great situation for everyone. 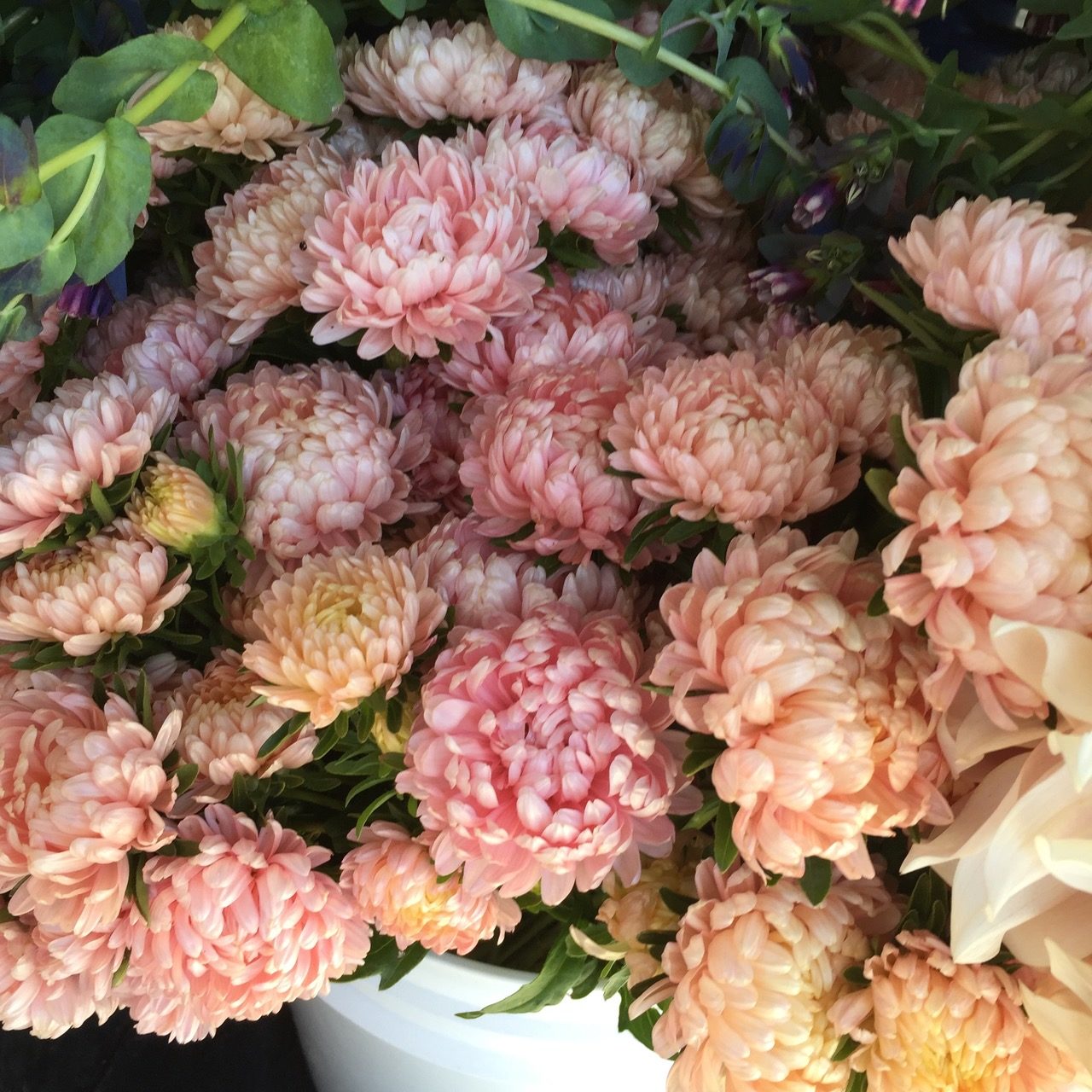 I bet we’re going to be showcasing lots of flowers that people haven’t even seen before, which is a really cool opportunity. What are some of the flowers you’re most excited about this year?

Well, I think that the local flower farms are maturing along with this growing movement. We’re partnering with 6 farms this year and working with up to 15 in different capacities. Now that some of the farms have been in business for a number of years, we’re seeing a lot more specialty and premium items rather than your typical (lovely but common) flower stand varieties. More specialty across the board. Perennials, hard-to-find varieties, all of that. This is seriously premium product, and the farmers growing it are deeply invested in it. This isn’t a farm stand.

As a normal consumer, trying to find ranunculus, or Icelandic poppies, or heirloom roses…it’s nearly impossible! We’re so excited to showcase all of this cool stuff to our local community. It’s really not widely available.

What can people expect when they walk through the doors? If anyone out there has been to the SF Flower Mart, I bet they can admit to feeling a little overwhelmed. I think our Mart will be more accessible for the retail customer.

Ha, for sure. There’s such a community around flowers in this county. I think you’ll feel like you’re buying from your friends. I bet people are going to be blown away with the amount of knowledge and pride coming from the farmers themselves as they sell their product. The farmer always knows the product the best. Kathy and I are so excited to have the farmers there to present their own product. As florists there’s so much we don’t know. Partnering with the farmers really gives us such great background information on the flowers we love working with.

The quality and the freshness is also huge. Many people haven’t seen flowers quite this fresh before. I know I hadn’t. Seeing these flowers coming straight in from the fields and getting them into peoples’ hands is what makes it all worthwhile.

We’d love to get the word out. Tell your friends! We’ll see you in May.

The Mart is open to the public for retail shopping. Businesses seeking wholesale pricing will need to purchase a pass. More info at http://www.sonomaflowermart.com/wholesale/