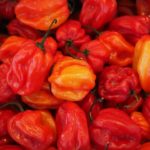 The world of peppers is a vast, exciting one. I kid you not! Before I started growing vegetables I had no idea that there were so many great and unique peppers out there. When I arrived to learn and later work at the Alan Chadwick Garden at UC Santa Cruz, my mind was blown by what was going on in pepper land. My gardening mentor, Orin Martin, is known to grow well over 20 varieties each season. Some sweet, some hot, some for frying, some for roasting, some just to try to shock your taste buds.

Being gardeners, and Californians at that, I’m sure many of you out there know about a lot of these peppers. You’ve got the plump red ‘Melrose’, the ‘Corno di Toro’, the sweet, sweet ‘Jimmy Nardello’ (my forever favorite), and the tried-and-true ‘Padron’ and his envious Japanese cousin, the ‘Shishito’.

But this season I’ve heard about some exciting new peppers to grow in these parts. Although old varieties, they’ve not commonly grown close by. As many of you know because I’ve interviewed him in the past, my boyfriend Matt is a local farm-to-table chef and just opened a new fresh food truck in Petaluma called The Bodega. He works closely with a group of local small farms and is always on the lookout for new and exciting vegetable varieties. This year he’s been raving about a few peppers in particular that local farmers have been producing. I’m here to spread the word about two standout cultivars. 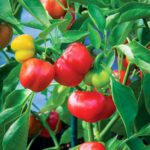 It’s so sad to think that a pepper as great as the pimiento (or pimento) has been relegated to squeezy-tube cheese and jarred olives. Most of us wouldn’t even recognize the pimiento if we saw it. They’re small, 3-inch plump peppers, easily mistaken for super hot ones. They’re actually quite sweet.

The vast majority of them grown are designated for jars or processed food products. But if you can find them fresh or, better yet grow your own, the possibilities for their use are vast. Try roasting them, peeling the skin and then marinating them. Or better yet, stuff them! They also make a really nice sweet pepper jelly.

Piano Farm in Bloomfield is growing the elusive pimiento pepper this year, as well as lots of other interesting crops. Some say they have the best tasting produce around. 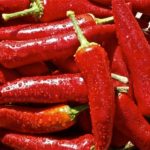 A chile pepper from Aleppo, Syria, the aleppo, even in dried form, has been hard to find lately. Pepper aficionados from all over have been hurting for the lost aleppo. What makes it so special? Well, common chile flakes sold at the corner store pack the heat, but don’t have much flavor to back it up. Aleppo’s, on the other hand, feature a complex flavor that lends itself to both savory and sweet dishes. Those in the know particularly appreciate the aleppo with meat dishes and those heavy in tomatoes.

Toscano Farm out in Lodi has been growing and selling fresh aleppo’s this year, to the delight of chef’s like Matt. Roasted and blended with vinegar and salt, you’ll create a dreamy and flavorful hot sauce to enjoy for weeks.

So, what’s the wait? Toss aside the boring green bell pepper and that stale shaker of chili flakes, and opt for some new peppers.