The Battle of the Beetle: How to Prevent Cucumber Beetles in Your Garden

I’m sure there was a time, somewhere deep in my suburban youth, when I wasn’t aware of the cucumber beetle. There must have been, right? Life was surely a dream – sunny days, ice cream cones, one big frolic in fields of golden wheat.

But, dear friends, the age of bliss and sweet, sweet ignorance has long since passed, and I find myself intimately tied to this beetle – my miniscule flying nemesis.

How to Identify the Spotted Cucumber Beetle:

This guy is tiny – only about 1/5 of an inch long! The size and body are pretty comparable to a ladybug, except with a black body and yellow spots. 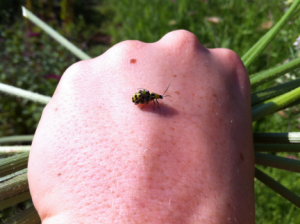 Life Cycle of a Cucumber Beetle:

If you don’t have dense vegetation in your garden during the winter, worry not – they’ll find a neighboring lot to hang in for the holidays! As soon as spring hits, they move into gardens and farms and begin to eat any weeds or flowers they can find, and then move on to tasty baby crops.

And here’s the kicker. First the hungry adults that survived the long winter will eat any vegetative growth you have managed to get growing – often the first seed leaves or stems of attractive annual crops. Meanwhile, they lay their little eggs (which can hatch in ten days) in the warming soil at the base of plants. The larvae then burrow into the soil and feed on roots. They reproduce two or three times during one season, so this cycle is basically on repeat.

Damage to the leaves, as shown here on my beautiful, helpless dahlia, presents as fairly sizable holes. Many petals seem to curl in on themselves – especially on my zinnias this year. Damage to plant roots is clearly more difficult to pinpoint, but often manifests in weak or stunted plants and flowers. But holes and weakness are not your only problems – cucumber beetles often transmit bacterial wilt and viruses with their munching.

What Do Cucumber Beetles Attack?

As its name suggests, the cucumber beetle is especially fond of cucumber and other plants in the cucurbit family – melons and squash as well as beans and peas. At the Bounty Farm this year, beetles are especially into my flowers! I don’t blame them – I traveled all the way to Texas to geek out at a conference put on by the Association of Specialty Cut Flower Growers and came back to Petaluma with a killer flower crop plan, including some special varieties of everything from asters to zinnias. 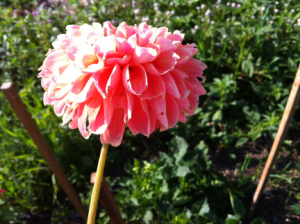 There seems to be no big secret to controlling cucumber beetles, but here are some timing and cultural practices that can help you get ahead of them. If any of these fail, I’ll lend you my intern who has a running tally of how many he’s squished personally.

Even though the cucumber beetles will find your garden eventually, it’s important to delay their arrival by clearing your ground of anything unnecessary in which they may overwinter. Thoroughly clear debris, employ deep cultivation, and otherwise keep a tidy garden!

The solution we employ the most at the Bounty Farm is perhaps the most straightforward: cover the plants! We use floating row cover on just about everything at the beginning of the season. Make sure to secure points of entry and it works like a charm. Remember to remove it when plants start to flower and need to be pollinated – by then your plants can withstand some damage anyway.

Many farmers also rave about kaolin clay – sold commercially under the brand name Surround®. You can spray this clay on the undersides of leaves to deter beetles, and it washes right off of the plant later.

Additionally, it will help to cover your soil with straw mulch in order to slow down beetles making their way between plants.

Get a Jump Start

Like many farmers I know, I start many early season crops in the greenhouse and then transplant them to give the crops a jump start over pests like cucumber beetles. Just four or five weeks of growth in the sheltered environment of a greenhouse (or your windowsill) can give many crops – like cucumbers and squash – a solid enough foundation to be able to withstand even a significant amount of beetle damage. This is a great method to keep in mind for next season.

Any time you face a problem with a pest in the garden, it’s worth thinking about who out there can eat this pest! Natural predators for cucumber beetles include parasitic nematodes, soldier beetles, and tachinid flies. So planting a variety of native and flowering plants on your property and increasing biodiversity will help to attract some of these predators as well as other beneficial insects.

Many farmers plant specific “trap crops” that they let the cucumber beetles munch on in favor of other crops. Baby Blue Hubbard squash is a great choice – they love it – and you can use your vacuum to suck them up! Finally, my friends, when in doubt, do like my intern and squish.

Next time I’ll dive into how to grow your own greens, and by mid-September hopefully the cucumber beetles will leave them alone!