How to Grow Your Own Cucumbers

In the heat of these Sonoma County August days, when the lettuce and volunteers begin to wilt, our thoughts over at Petaluma Bounty drift toward a break in the shade of the apple trees, cool dips in the ocean, and…cucumbers!

Ah, the cucumber. So simple, so juicy, and somehow, always cool to the touch. A gem of a plant, really. There are more varieties out there than you could ever imagine, so you’ll never tire of them. A quick trip over to Baker Creek revealed that they alone carry 44 heirloom varieties, with incredible names like Tendergreen Burpless and Carosello Spuredda Leccese Verde Melon.

Last season at the Bounty Farm we decided to grow just about every variety we could get our hands on. Man, was that confusing! I’d see lovely young families out at the farm volunteering for morning harvest, standing out in the fields scratching their heads and wondering how to apply my harvesting instructions to a 100 foot bed crammed full with 12 different varieties of cucumbers. Especially with all the different shapes and sizes – some resembling pale white golf balls while others were dead ringers for long kelly-green zucchini. Needless to say, I would dash across the farm and do what I’ve learned that farmers everywhere do all the time – make an ‘educated’ guess about when these varieties, many new to me, were ready for the picking.

This year we’ve simplified. We’re growing about three successions of cucumbers and only three varieties. The first succession, the Straight 8, just finished for the season and proved to be a great mid-sized multi-use cucumber – similar to the Marketmore that we grew last year. I made some great, simple fridge pickles with this Smitten Kitchen recipe and they were delicious.

Now we’re on to a California favorite – the lemon cucumber! 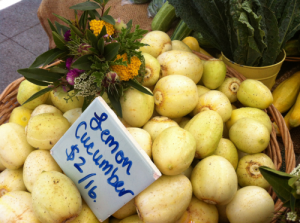 We’ve been harvesting ours for about two weeks and they are selling-out at the farmers market and are a hit with families visiting the farm. If you haven’t grown lemon cucumbers before, I highly recommend trying them. They’re beautiful, prolific, have a sweet light taste, and are supposedly easier to digest than other cucumbers. Fun for the whole family.

For our third variety this year we’ll be growing Armenian cucumbers which – get ready for this – are not actually cucumbers but, botanically speaking, are MELONS! Maybe all you savvy Californians already knew this fun fact, but it was news to me.

So, now that we’ve covered a few basic varieties let’s get into your gardens and start growing!

When to Plant Cucumbers in Your Garden

Most home gardeners will find that one or two plants will more than feed their family. If you want cucumbers all summer, I’d suggest starting one plant in mid-May, another mid-July, and a last ‘succession’ in late August that will feed you through the fall. You’ll want to find the sunniest spot in your garden and space plants about 2 feet apart. Or you can plant them closer together and let them climb up a trellis or a fence. 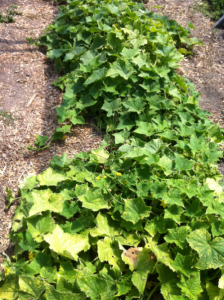 Should I Plant Seeds or Transplants?

Cucumbers, along with other members of the cucurbit family, such as melons and squash, don’t appreciate you messing with their roots, making them a good candidate for direct in-ground sowing. You can begin as early as mid-May.

Some gardeners transplant cucumbers to either get a jump start on the season or to avoid weed and pest infestations. You can certainly go this route, but just be sure to get your transplants out of their pots before they become root-bound, and try to disturb the roots as little as possible.

How Often Should I Water and Feed My Cucumbers?

Cucumbers are heavy feeders, so you’ll want to make sure that you add plenty of compost and/or manure to your soil/growing medium before planting. In addition to feeding the plants, the presence of organic matter will help your soil hold more water for your thirsty cucumber plants to soak up. .

Make sure to water deeply and often – these plants will be thirsty and you don’t want to let them get stressed out. I’ve got some great water-saving tips in my last post,  including installing drip irrigation in your garden as well as mulching around the base of the plants.

Once your plants start producing, which should be about a month after you get your transplants in the ground or two months after you sow the seed, you’ll need to harvest thoroughly and regularly to avoid having huge, bitter fruit. We harvest ours three times a week and still miss some huge guys that seem to triple in size over the weekend while I’m not looking.

Problems to Look Out For

The biggest problems I encounter with my cucumber plants are cucumber beetles and powdery mildew. For cucumber beetles, the easiest thing to do is to cover your plants while they’re young with some lightweight row cover. Once they start flowering and are a good size, you can remove the cover and by that point the plant should be strong enough to outgrow any beetle damage.

As for mildew, our main strategies here at the Bounty are prevention and delay of infection. Keep the leaves as dry as possible, encourage air flow by spacing plants appropriately, and remove affected leaves as soon as you see any mildew appear. With these foggy mornings, we’ve found that it’s not a question of if the mildew will appear on our cucurbits, but when. I’ve saved myself a lot of stress using that mindset. Follow these steps and even if mildew sets in, you’ll get some good fruiting before it takes over completely!

For now I’ll leave you salivating with a shout out to my favorite cucumber dish to date: the smashed cucumbers at Mission Chinese down in SF, captured beautifully on Snackish.

Next time on the blog I’ll dive into trials and tribulations with my two arch nemeses: the cucumber beetle and the flea beetle. For now, go get in your garden  and let me know how your cucumbers grow!