Every year I freak out over any little thing that happens to my peppers during their long journey in the greenhouse through the months of February, March, April, and sometimes May. I find myself especially protective over my growing peppers (read: insanely nit-picky) and watch their every minor change for signs of stress, disease, weakness, alien abductions, and other potential threats and disasters.

It’s not that peppers are especially vulnerable, or even that needy (as long as you know what you’re doing). It’s just that they’re my favorite crop – favorite to sow, favorite to eat, favorite to sell, favorite to watch grow and redden in the fields.

Right now my peppers are just starting to ripen up and change color. Some of you out there may have earlier peppers than we do at the Bounty – they really love the heat (hot varieties especially – the hotter the weather, the hotter the pepper). Even a few degrees difference can sometimes mean a much earlier harvest. What are your growing peppers up to?

Growing peppers takes a really, really long time. From seeding to transplant is often 10 – 12 weeks. The process is very similar to starting tomato seeds, and I usually do them together in mid-February and end up wishing I had started the peppers even a few weeks before. I sow the seeds really densely in redwood flats or in greenhouse carrying trays, filled to the top with moistened seed starting mix. I use a pencil to create little channels in the trays about ½ inch apart, and then carefully place seeds in each channel, with just enough space so that they’re not touching. I then lightly cover them with soil and set them in my greenhouse to germinate on a heat mat, which will really speed up the process. If you don’t have a heat mat, putting them in a warm space will help. As with most seeds, remember to keep the soil surface moist until they’ve germinated. Once they’ve germinated (1-2 weeks usually), reduce your watering to just once or twice a day, watering more infrequently and more deeply as the plants grow. 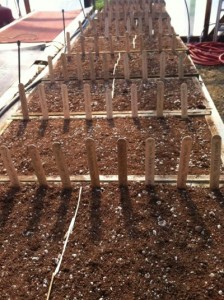 And then you wait. And wait.

About six weeks later, or when they’ve formed one or two sets of true leaves, I carefully pot them up into 4″ pots, let them rest in the shade for a little bit, and then move them back into the greenhouse to continue growing in the heat for another month or so before transplanting them to the field.

It’s important to bring your growing peppers outside to ‘harden off’ (get them used to the real world and outdoors conditions) for a good week or two before you transplant them. You know they’re ready when they’re good sized and the roots have developed a robust and branching network (I often take the plant and gently coax it out of its pot by turning the whole thing upside down).

When planting, remember that peppers like to be pretty deep in the soil. You can even bury the first set of leaves underground. Then, give them a good watering. For the first few weeks they’re in the ground, water them about every other day. As they grow and mature you can cut back on watering a bit and really make sure the soil dries down in between. Peppers won’t appreciate as much stress as tomatoes, but they also don’t like to remain saturated. 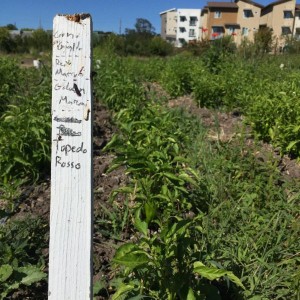 Peppers benefit from supplemented feeding throughout their long growing season. In addition to regular sprays of compost tea or fish/kelp emulsion, I usually try to get into the field and apply a dose of nitrogen-rich fertilizer – I prefer Sustain or bloodmeal, twice between transplanting and before they start fruiting. These fertilizers come in granulated or powder form and you can simply take a few spoonfuls, scatter them in around the base of the plant (but not directly on the plant), and scratch it in with any hand tool. Your goal in all this extra feeding is to help the growing pepper plant develop a big, robust structure and canopy before it sets any fruit.

Peppers can attract aphids (those pesky little guys that we talked about last time), anthrcnose (a nasty-white and ashy looking fungal disease that rots your pepper fruit), and phytophthora (a sometimes-devastating blight). However, if you treat your soil well and you don’t notice any signs of problems in your plants, there is no need to worry a lot about pests.

My biggest problem with growing peppers is actually sunscald – if the plants don’t create a big enough canopy to shield the peppers, they can get burned from the sun and start to deteriorate fairly quickly. It’s worth taking frequent garden walks and checking for this. Try harvesting them a bit early if they begin to display sun damage.

When to Harvest Your Peppers

More than anything, growing peppers requires patience. I can’t tell you how many eager beavers walk through my pepper field asking to harvest green peppers. Let me tell you, people, with the exception of a few specialty peppers, most peppers should be allowed to fully mature to either red, yellow or orange – they’re not meant to be harvested green! Much like the prevalence of granny smith and red delicious apples, green bell peppers have unfortunately taken center stage in our nation’s supermarkets, clouding our vision and tricking consumers into thinking that there are only a few peppers out there, AND THAT THEY’RE GREEN.

So, once your peppers are ready harvesting is pretty easy by hand or with a pair of scissors. I cut mine with just a tiny bit of stem left on.

Peppers enjoy a pretty long harvest season. Here in northern California, many pepper plants will produce from July or August well into October and sometimes into November. When they start slowing down or when you want the garden space, go ahead and yank the whole plant out of the ground and throw it in the compost pile.

Who doesn’t love Jimmy. Bright red and long and slender, you would mistake him for the hottest pepper out there, but ole Jimmy is a sweetheart. Fry him up in a pan with some olive oil and salt and the sweetness will only increase. If you haven’t grown Jimmy Nardellos yet, you’re in for a real treat next season.

I’m guessing most Californians are schooled up on the padron pepper by now. This is one of those few varieties that you can harvest green and know you’re not cheating yourself out of the full flavor. They are harvested really, really small – about half the length of your pinky – and are, in my humble opinion, best when dry-roasted in a pan and then drizzled with olive oil and salt.

These huge late-season red and yellow (respectively) bullhorn-type peppers are sweet raw or cooked, and just gorgeous to look at. Grow tons of em and eat em any which way. The plants are especially big and sometimes require trellising the way a tomato would.

What peppers are you growing this year? Let us know, post pictures as they mature! Next time on the blog we’ll be talking all about late-summer housekeeping in the garden – what tasks and processes we should all be keeping in mind as we prepare to enter into fall.